EE wins for the seventh consecutive time followed by Vodafone, Three and O2

5G deployment in the UK is progressing significantly 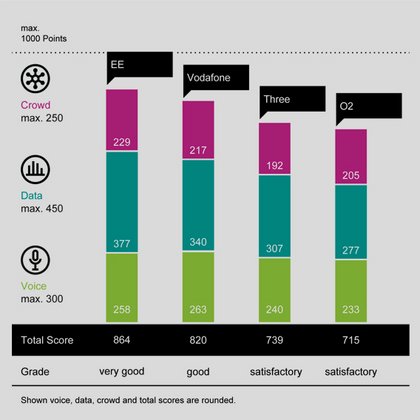 A new report analyzing the performance and reliability of mobile voice and data services in the UK ranks EE’s mobile network first, ahead of Vodafone, Three and O2. The benchmark is conducted annually by infrastructure and benchmarking specialist umlaut, now part of Accenture, and international consumer telecommunications magazine ‘connect.’ EE was awarded the top position for the seventh consecutive time.

Hakan Ekmen, CEO umlaut telecommunications, said: “Congratulations to EE for winning the umlaut connect Mobile Benchmark in the UK for the seventh time in a row. We would also like to recognize Vodafone for offering the best voice service, Three for the highest score increase, and O2 for its improvements in Voice and Data compared to our previous benchmarks.”

Hannes Ruegheimer, editor at connect magazine, added: “Operators in the UK have been working hard to improve their networks, including their 3G, 4G and 5G deployments. Compared to our previous tests, 5G coverage in the UK has progressed significantly. We hope our benchmarks will contribute to continued positive development and even more benefit to consumers.”

By far the most densely populated area in the UK, Greater London is an exceptionally demanding terrain for deploying and maintaining mobile networks. Yet, all networks score a little higher in the capital than the overall assessment. Again, EE leads the pack with better scores in the Voice category and crowdsourcing analysis but falls behind in Data compared to its overall results in this category. The same is true for the London-second Vodafone and third-placed O2. Three ranks fourth in London with a slightly lower score in the Voice category than its overall results but a somewhat higher score for Data.

umlaut measured the performance and reliability of mobile data and voice connections in three ways: 1) Drive tests – Four test cars traveled 19 cities and 46 towns covering approx. 10,000 kilometers. 2) Walk tests – Two test teams visited eleven cities, traveling between cities by train. The tests were conducted from October 25 to November 15. The total testing area represents 17.3 million people or approx. 26% of the population in the UK. During drive tests and walk tests, each network's highest possible data and voice performance are measured under controlled circumstances. 3) Crowdsourcing – Over 24 weeks (May – November), approx. 2.7 billion data and voice connection samples from 670,000 users, representing 99.8% of the UK's population, were analyzed. The results of all three tests were thoroughly weighed to achieve a realistic and conclusive assessment of each network’s potential and performance.

The umlaut connect Mobile Benchmark is an independent evaluation that provides a detailed orientation to consumers and a fair, transparent and neutral evaluation and comparison of their networks' capabilities to management and supervisory boards of operators. It combines umlaut's expertise in measuring network performance with connect's long-standing editorial experience and knowledge in testing telecommunications products and services. First conducted in Germany more than 20 years ago, umlaut and connect since 2009 extended their mobile network benchmark to other European countries, including Austria, Netherlands, Spain, Sweden and Switzerland. In the UK, the benchmark was published first in 2014 and paused in 2020 because of the COVID-19 pandemic. It has become the de-facto industry standard for customer-perceived network quality.

umlaut, part of Accenture, is a global, full-service, cross-industry, end-to-end company that offers advisory and engineering services to clients all over the world. In-depth domain expertise, broad practical knowledge and interdisciplinary collaboration allow them to add value, quality and focus to their clients' organizations, services and products, in disruptive times in which industries are increasingly converging.

Within an able and agile collective of 20 consultancies and engineering firms spread across 50 locations all over the world, 4,200 specialized experts and engineers provide innovative solutions and transformations across all industries and their various intersections as well as serving the public sector and developing organizational cultures, structures and processes.

TECHNOLOGY TRENDS FASCINATION. This is the motto of WEKA MEDIA PUBLISHING GmbH. With the brands connect, PC Magazin, PCgo, COLORFOTO, AUDIO, stereoplay and video, WEKA accompanies the readers through exciting worlds of technology, both print and digital. High editorial competence and objective product tests in their own test laboratory are a constant requirement. This is one of the reasons why WEKA MEDIA PUBLISHING GmbH is one of Germany’s largest technology publishers. Also, for competent and independent test services, the company offers a test laboratory that is unique in the publishing industry.